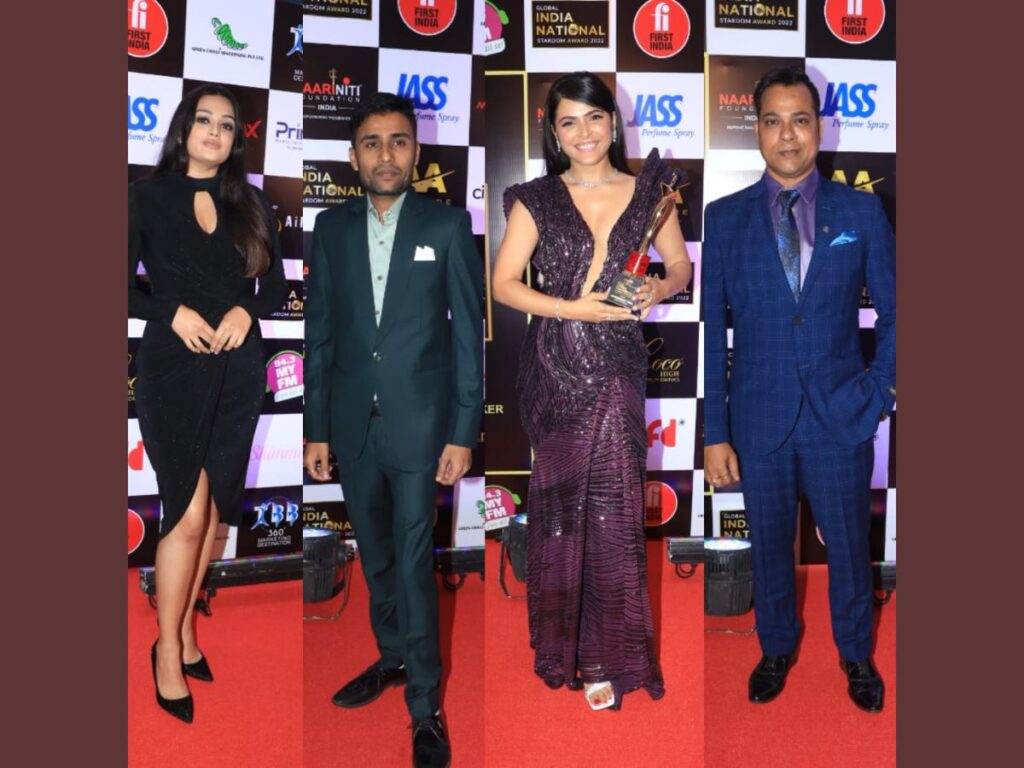 September 27: The Naarineeti Foundation presented the Global National India Stardom Awards 2022 to prominent personalities from the art and entertainment world and other fields at a function attended by the who’s who of the Bollywood and glamour world in Mumbai.

High on entertainment, glamour, and fun, the awards night was a night to remember for the award winners and guests. The Global National India Stardom Awards 2022 were conferred on personalities from the world of art and other fields at the ceremony to celebrate excellence.

Neeti Goel was awarded for her contribution as an entrepreneur and philanthropist, and Rehaa Khann as model and influencer. Saher Bhamla was awarded for his efforts as a climate warrior, while Dr. Rekha Chaudhari was recognised as Wellness India Ambassador. Madhurima Tuli was named the Most Stylish Actress and Shivangi Joshi, the Most Popular TV Actress.

Supriya and Sujoy Mukherjee were honoured as the Best Short Film Producer, and Dinesh Sudarshan Soi as the Best Music Video Director.

Twinkle Vasisht was awarded as the Best Supporting TV Actress for her performance in Kundali Bhagya. Karanvir Sharma won the Best Debut Actor OTT For A Thursday. Akanksha Puri was named the Fashion Trailblazer of the year.

Nidarshana Gowani was felicitated for her contribution as an entrepreneur & philanthropist, while Vijay Ganguly won the Best Choreographer award for ChakaChak Atrangi Re. Khushboo Khan was awarded for her work as an influencer.

Hari Tu was named the Best Realistic Music Video, while singer Pearl V Puri was selected for the Hero in Real Life Award for helping the poor and strays. Malvi Malhotra was named the Rising Star, while Amith Tyagi, Executive Editor of India Today Group Aaj Tak was felicitated for the Best entertainment show for Saas Bahu Aur Betiyaan.

Ashish Tiwari, Managing Editor (Entertainment) of First India Group was also awarded on the occasion. Manav Manglani for awarded as the Best content creator for entertainment and Bollywood, and Varinder Chawla for the Most glamorous paparazzi front of the year.

Ihana Dhillon was awarded as the Style Icon, Akshay Oberoi for Outstanding Performance of the Year, and Arjun Bijlani as the Most versatile actor in an OTT series for his performance in Ruhaniyat. Akasa was conferred the Best Versatile Singer award, Biswaa as the Rising Singer award, and Vishal Kotian as the Best Entertainer (Male).

Shimmer Entertainment promoted the Global Stardom Awards 2022, which will go down in history as a night to remember.