Gaalib is always special for me, as it is the beginning of non-biographical movies journey of mine: Dhiraj Mishra 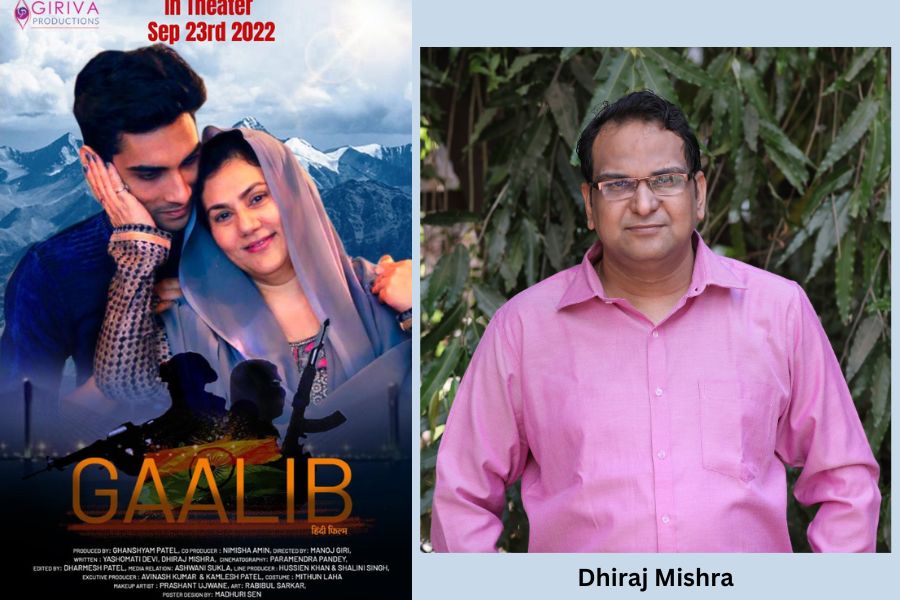 Mumbai, September 20: The writer Dhiraj Mishra has come a long way with his writing skills and love for freedom fighters and their stories. He is known for his biopic films. But as everyone wants versatility in their portfolio, he is also one of them. He is coming up with a real story which is unconventional but something that the world needs to know. Everyone knows about Afzal Guru, the one who had attacked the parliament, but nobody knows about his family. Dhiraj is bringing the story of Afzal Guru’s son Gaalib who had secured 4th position in his high school examination. It is quite ordinary for most people, but for Gaalib, it is not, says Dhiraj. Gaalib will hit the theatre on 23rd Sep 2022.

In an unconventional family where the father is a declared terrorist, what suffers a son and a wife go through every day even though they are not involved in any such activity? They also must face abuse from society and the media.

Gaalib is one such film which will give you goosebumps. The pain and suffering of innocent people, on the one hand, and on the other, the zeal to study and become a civilized citizen is quite rare. The son should not be punished for the mistake of the father, says Dhiraj.

Talking about the journey of Gaalib, he said Filming a real story is always challenging and time-consuming because every incident is connected to another one, and to link that, you need to find the lost pieces of the puzzle. It feels so satisfying to join all the links. During my journey, I met many journalists and social workers who were imprisoned. I got some information from them and started preparing my script. I have also added many fictional incidents in the script as Kashmir has always been in controversies with Afzal. As a responsible writer, I also had to deal with the challenge that the film should stay away from controversies, although people deliberately added such spices to make the film more interesting.

I always try to be more than a writer for my film. I also participate in the production of the film, which includes casting, location, costumes, screening, editing etc. Everything goes through my eyes. The character of Afzal’s wife was very important in the film, and for this, I wanted a face who could do justice to it. My search was completed in the form of Dipika Chikkhalia.

The hunt for Gaalib’s character in the film ends at Nikkhil Pitaley. The character demanded a silent and well-educated child who must face the scorn of society. Dipika Chikhalia was a household name and gathered fame as Sita in Ramanand Sagar’s Ramayana. It was contradictory for people to take up this news of her playing the role of a terrorist’s wife. It was feared that people would oppose it and did so when the news of the film came that she was becoming a wife of a terrorist in Gaalib. During that news breakout, we faced a lot of hatred and abuse from social media, and I became uncomfortable because before this, I had made a film on such great revolutionaries who had dedicated everything to the country, and I was always praised whether it was Lal Bahadur Shastri’s film in Jai Jawan Jai Kisan or Chapekar Brothers of Pune.

Gaalib was like a biopic, but the topic was controversial. But I was sure my script would make people emotional. It is purely a film based on a mother-son relationship to awaken the love of the country. Like any other film, Gaalib is special to me as, as it is the beginning of a non-biographical movie journey of mine. Under the banner of Giriva Productions film Gaalib is produced by Ghanshyam Patel and co-written by Yashomati Devi.